A downloadable interactive story for Windows, macOS, and Linux

The Goddess of the Waves was a deity of modest powers, and an even more modest range of influence.

She helped fishermen and sailors to find their way home, even through the thickest fog, through the fiercest storms.

Now she is dead. There are no stories left to tell about her

Queen Stephania was a fierce woman, an unhappy woman.

She rose higher than people thought she could. But her triumph had a bitter aftertaste, as it left her ruling over those she despised.

Now she is dead. There are no stories left to tell about her.

Queen Caramela was raised by a fierce, unhappy woman, and lived under the influence of a deity of modest powers.

All she wants is to keep harmful things at a distance, to live for beauty and fun, for things to continue as they are. She won't get her wish.

She lives. This is her story.

Hierofanía 2 is a visual novel with seven endings.

It is (shockingly!) the sequel to Hierofanía, which you can get here.

Original Soundtrack from the first Hierofanía composed by A. Rothaus.

Additional tracks by me.

Is there a walkthrough for this? I haven't been able to get endings 5-7. Aside from that, this visual novel is amazing, even better than Hierofania. I love it.

The trailer alone is inspiring and breathtaking

Thank you very much!  It was my first shot at trying to animate something... And remains my longest one :)

Hi, I absolutely love your work with H1 and H2, would have left a comment in H1's page if I could. I am so in love with the world-building, characters, art, music, story, everything! Honestly these are some of the best VNs I've ever read, and I can't wait for H3. More accurately, I wouldn't mind waiting a century for H3 because I know it's going going to be worth it. Keep up the good work!

Side note: I would appreciate a walkthrough because I'm having trouble getting some of them (╥_╥) So far I've gotten Shadowed, Hardworking, Isolated, Neutral, and Peacekeeping. Also, it would be great if the next games have a CG gallery and music box function.

I played hundreds of visual novels, RPGs and adventure games because story-rich games are my favorite and that's the only thing I play for the most part.

Speaking of the visual novels, I played several big productions, some even with budgets of over half a million dollars. And you can see it obviously, in the production, the art and animation looks expensive, the incredible voice acting. But there's a saying that I hear from movie reviewers on YouTube all the time, might not apply to everything but it applies to my experience, it goes "you cannot buy good writing". These -relatively to VNs- big productions don't have the charm in the art style, in the music, specially in the writing, sometimes the writing is even generic.

Hierofanía 1 and 2 are among my top 10 favorite VNs. I played em I think in 2016 (because it feels like 5 years ago but I know I played both one after another, might have played the first one in 2015 and the 2nd one in 2016, I don't really remember, it's been a while). The art style and music is so unique and charming, the writing is so good. The world building is immersive, believable and interesting.

It's been like 4 years since I played em and in those years of playing VNs they're still in my top 10 VNs. I wish I could say more but this is not a review. It's been so long since I played them so I don't have a lot to say and I really didn't explore all the endings (explored the endings in the first one til I got the one I wanted, then in the 2nd one I got an ending I liked in the first try so I didn't want to ruin it lol) but nevertheless these VNs are really close to my hearth. And after all these years I just couldn't bear to not even say thank you for the amazing stories. I made this account just to make this comment. Thank you.

Please excuse me while I bask a little on my hipness and popularity with today's youth.

Ok, that's it, I basked for three whole days, now let me go on.

Thank you so much for your words, for your support. It means a lot.

To tell the truth, Hierofanía 2 got  less comments that Hierofanía 1, so... well, I try not to be too whiny (being somewhat whiny is unavoidable, it's in my nature) but when you work alone, staying motivated is all on you, you know? I'm not a team, it's just me. My games are freeware, they always will be.  My payment is this, once in a while, someone tells me they liked my work, that they read and they remember it.

Today I'm a millionaire.  Thank you.

Hi there! I know this is not said enough but I love your games! The first one I played was Hierofania and it was at the urging of my friend but I fell in love with your writing and continued to play your other titles.

Not only you have a captivating and unique art style, I also love your writing, you always kept the story very engaging and interesting! I absolutely adored the soundtrack too, it's always one of the first reasons which make me wanted to the game.

Thank you for your hard work in creating such beautiful games and I hope you will continue to make even more in the future, your games always give me pleasant memories to return to whenever I revisit them.

Thank you so very much for leaving feedback!  You're super kind.

Although Hierofanía 3 is in hiatus, I actually have the script for another project on the works! Knowing there's people willing to play it, makes me happy.

Seriously, thanks for your kind words.

This was surprisingly good. The story was interesting and easy to follow considering I didn't play the first game. I wish you did give more than two options for choices. But it adds to the fun in a way. I ended up with four different endings before I stopped myself. I think there's around 8 in total?

Yes, there are eight endings! (One is a short "Bad ending!" at the very beginning)

I really wanted H2 to be easy to understand without playing H1, so thanks a lot for telling me you were okay with it. :) (I mean, I wrote it, so it's hard for me to approach it without preconceptions!)

For the third, though, people will have to play both 1 and 2, but it'll be the last, so, I hope they'll be willing to take that step :D 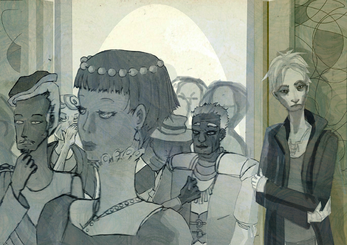 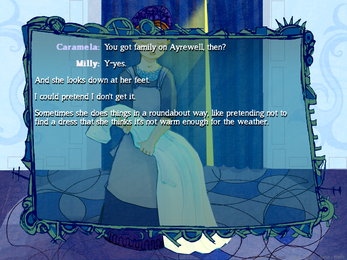 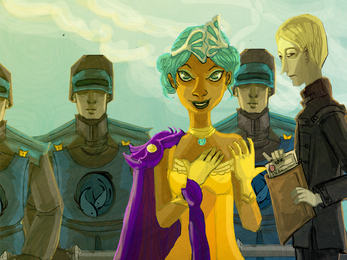 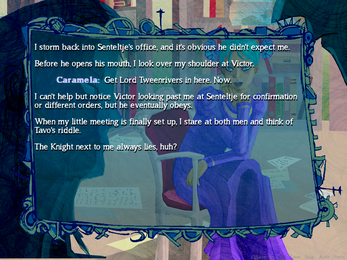